Throughout the history of science and engineering, there have been many individuals who have created inventions that benefited and contributed to society. Nikola Tesla’s designs for the alternating current (AC) electrical motor paved the way for the future in electrical engineering; Albert Einstein’s theory of relativity allowed us to look at the universe and matter in a different light; and Issac Newton’s three laws of motion enforced the relationship of how objects react to motion placed upon them. Thomas Edison’s inventions, the kinetograph and kinetoscope, were products of Edison’s belief that moving pictures would provide home entertainment to wealthy families (HUN 196 Course Pack 1, 21, April 2014, p. 1). However, what Edison didn’t predict was that his inventions would lead to the creation of an industry that would thrive for years to come.

Thomas Edison and the kinetograph.

Before movies came about, people entertained themselves in whatever way they could–depending on who they were. Those who had vast wealth who afford to attend country clubs, visit theaters, or partake in sports. The working class, however, didn’t have much recreational activities assessable to them. Life for a working class citizen was “work itself–half of every twenty-four hours was spent on the job, eleven hours in the best of circumstances, punching in at six or sometimes seven, checking out again at six, in winter never seeing sunlight off the job” (HUN 196 Course Pack 1, 21, April 2014, p. 2). The only places to go for leisure time and pleasure were neighborhood saloons; these buildings contained available activity rooms ranging from pool rooms, skating rinks, and dance halls. Unfortunately, these saloons were viewed by police and reformers as being “centers of vice, and when times were hard they closed” (HUN 196 Course Pack 1, 21, April 2014, p. 2). It wasn’t until 1893-96 that Edison’s inventions began to make a mark on society. When kinetoscope peep shows and large motion-picture projection started to become prevalent, the working class had a new medium of entertainment that was accessible; however, difficulties would arise that challenged the industry born from these inventions.

The inventors behind motion pictures didn’t intend for their technology to be used as tools of entertainment. These individuals were pioneers of science, and their main interests were creating technology that could “master movement and control time” (HUN 196 Course Pack 1, 21, April 2014, p. 3). When scientists like Étienne-Jules Marey and Eadweard Muybridge perfected their intended goals, they ended up creating the reasons people were drawn to movies: they subjected “time and motion to the human will” (HUN 196 Course Pack 1, 21, April 2014, p. 3). Meary and Muybridge began working together after they got in contact when the first issue of the French scientific journal La Nature was printed; Meary wanted to observe and analyze the movements of a horse while using a motion device called a phenakistoscope, while Muybridge took accurate photographs of horses in motion. Muybridge, with the help of Leland Stanford, created a “battery of cameras” that took shots of a horse in motion whenever it tripped on a series of wires. Later, in 1873, Meary perfected this idea through a camera the size and shape of a rifle, which took twelve shots in precise intervals. This became the first camera to take motion pictures. 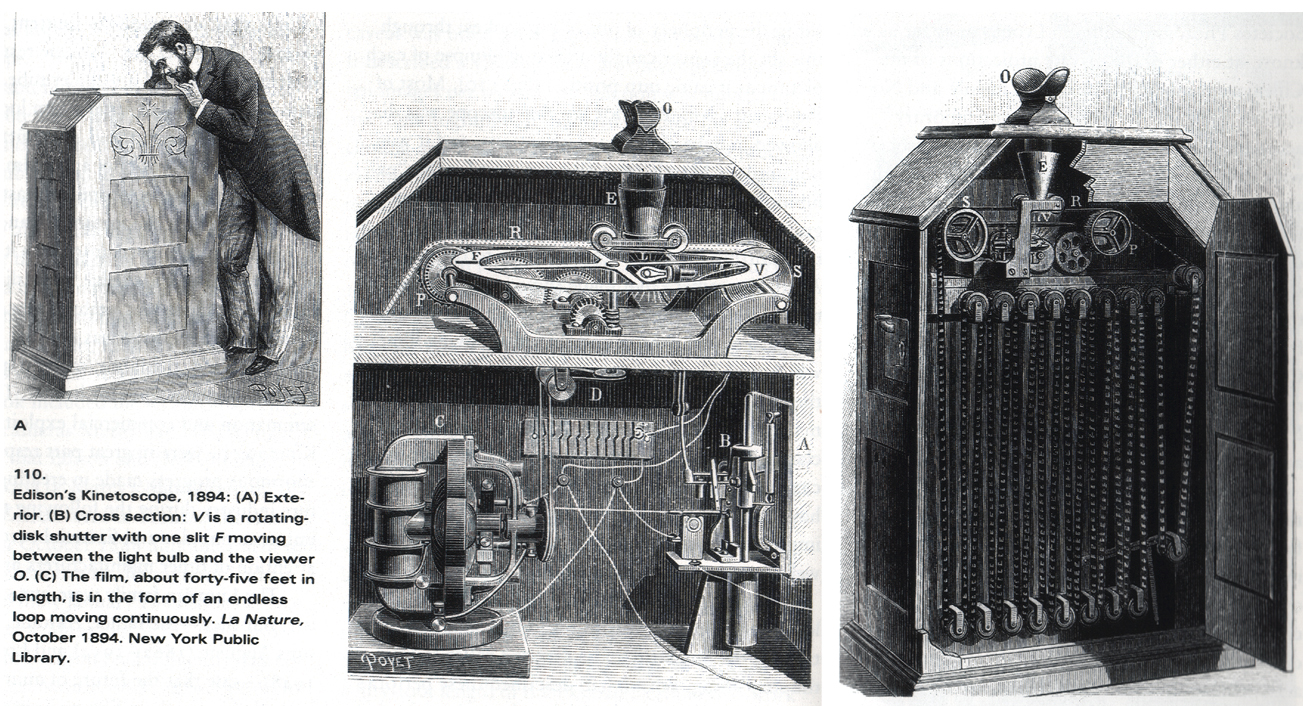 Later on, Marey continued to make improves to his inventions. When he developed the first projector to use celluloid film, he came across a difficult problem: the photographs he obtained were too lose together to be distinguished from one another. He solved this problem when he “dressed a man in black, with strips of silver lace attached to his clothes at his head and along an arm, leg and foot, and photographed the man running against a dead black background. The resulting photograph shows only white lines of movement, compressed closely together but with each separate line distinct” (HUN 196 Course Pack 1, 21, April 2014, p. 7). Before his death in 1904, Marey wrote, “Animated pictures, interesting as they are, are of little advantage to science, for they only show what we see better with our own eyes” (HUN 196 Course Pack 1, 21, April 2014, p. 7).

In 1889, Thomas Edison met Marey and was shown the scientist’s work with transparent film strips. Edison and his assistant, William K. L. Dickson, used Marey’s work to improve a device resembling an early phonograph; these improvements were later incorporated into the kinetoscope, which showed short motion pictures at a duration of one minute. When Edison began producing a science-fiction book with George Parsons Lathrop, he envisioned a future where “well-to-do owners of phonographs would also have visual reproductions of operas and stage productions to accompany their recordings” (HUN 196 Course Pack 1, 21, April 2014, p. 9). Author Edward Bellamy wrote in his novel Looking Backward: 2000-1887 his predictions of what the future held for devices like Edison’s kinetoscope. Bellamy predicted a “future society where the phonograph record (sometimes accompanied by a viewer showing a series of still photographs) had completely replaced the book as the principal medium of communications” (HUN 196 Course Pack 1, 21, April 2014, p. 9); Bellamy’s predictions were accurately correct, as television, radio, and tape recorders all came about in three quarters of a century later. The industry of film began to take off after 1890 when the United States, Great Britain, France, and Germany started to compete against each other for the achievement of creating working motion-picture cameras and projectors. Inventors relentlessly worked towards attaining full color, synchronized sound, and three-dimensional in films; meanwhile, Edison profited off the sales of his machines through kinetoscope parlors. Complications arose for Edison after a motion-picture producer called the American Mutoscope and Biograph Company came into the market to compete with the kinetoscope. The company produced the mutoscope viewing machine, which was similar to the kinetoscope, except that it used postcard-sized flip cards instead of strip film. One individual behind the company was W.K. L. Dickson, a technical expert who previously worked for Edison.

The industry of films grew exponentially when “the motion pictures came to life in the United States when they made contact with working-class needs and desires” (HUN 196 Course Pack 1, 21, April 2014, p. 13). When empty stores were turned into movie theaters–nickelodeons, as they were sometimes called–a new business arose for some; more than 600 nickelodeons were established in New York, which generated up to $6 million dollars in profits. For Edison, however, things began to change as he dealt competition he didn’t anticipate. In order to stymie his competition, he began patenting inventions that weren’t even created yet; with so many patent claims, this created conflict with others when inventions with similar ideas came about. An inventor by the name of Thomas Armat tried to sue Edison when he tried to patent the vitascope he created. Edison was eventually put out of business when he failed to improve his ideas instead of fiercely competing with others.